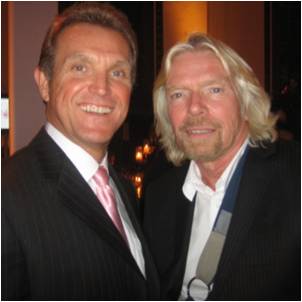 Sitting at dinner one night a friend asked, “If you could meet anybody in the world right now, who would it be?” Without a thought I responded, “Sir Richard Branson, no doubt about it!”  To my surprise, my friend responded, “Done, I can make that happen in 90 days or less.”  And he did!

While I didn’t have a tremendously long conversation with Sir Richard, it doesn’t take long to learn why he is so successful in his many endeavors. The first thing you notice is how tremendously present he is with each and every person he’s speaking with that evening. No matter who came up to him, he treated them with respect, dignity, and was tuned in to that conversation alone.

His presence in the midst of so many potential distractions showed a great attribute of his leadership. It was clear to see, that he truly cared about the individuals and their desire to speak with him. It was a glimpse into the focus that he brings to each and every entrepreneurial task he entertains.  The value he placed on being present in the situation was obvious.

After our early pleasantries, I asked Sir Richard, “What is the key to the many businesses you have and how do you keep them operating so well on a consistent basis?” His answer did not surprise me in the least. He said simply, “It’s all about the people. The people at Virgin are our greatest asset. The people are our product in the majority of our businesses.” He also added, “You have to have fun. What’s the use of having a great business if you’re in conflict all the time, you should be enjoying the journey.”

It was tremendously evident to me that night, that Sir Richard Branson talks the talk and walks the walk. I also mentioned quickly that the favorite place for my wife Peggy and I is the British Virgin Islands. In fact that we had sailed past his private island, Necker Island on our last trip down. It brought a smile to his face, you could almost see in his eyes him reliving moments in the BVI’s.

After meeting Sir Richard personally, I was encouraged to learn more about him, his management style and his philosophies. He wrote in one biography, “My interest in life comes from setting myself huge, apparently unachievable challenges and trying to rise above them… from the perspective of wanting to live life to the full, I felt that I had to attempt it.” Such a great way to set your path in life!

While being one of the most amazing entrepreneurs in the world, Sir Richard Branson presents himself as someone that simply has a desire to solve problems that need a solution. What a wonderful place to come from day in and day out. His success comes from a creative mind, the desire to contribute, and most importantly, I believe from our heart that wants to make a positive impact in everything he touches.

Thank you for your time, gracious demeanor, the lessons and the legacy you leave with all of us through being such an amazing living example of how you live.