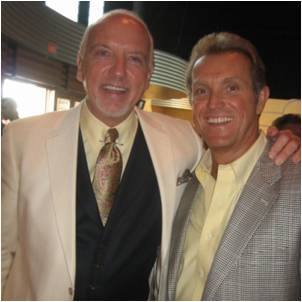 I was talking to Mark just the other day and we were recounting when we first met. It was at a Parker Seminar in Toronto August 28, 2003. Mark and his Chicken Soup for the Soul co-founder Jack Canfield were speaking at the event that turned out to be my first paying big as a professional speaker. The SARS epidemic had hit the Toronto area and two speakers backed out of the event. That opened up an opportunity for me to not only have one time to present but two.

I was honored to have both Mark and Jack attend one of my sessions. After it finished my presentation both Mark and Jack came up to me to congratulate me on my efforts. In fact we got into a conversation about where my career was headed. I was honored to have them both suggest that they felt being a professional speaker was what I was truly meant to be doing for a living. Rather they both felt that simply being in business as the VP of sales, or even just as a sales trainer was not using my God-given talents fully, and that I was called to be a professional speaker delivering messages to provide greater impact.

Now that was a pretty heavy trip to have them lay on me so I asked him to explain it to me. Share what you’re thinking. He said because of the talents and capabilities God granted me, I had the obligation to make as much money as I possibly could. I can tell you when he said it I immediately rejected that idea saying, “Oh this is where it all comes to…it’s about it’s all about the money, right?”

I have to admit, I was a bit taken aback. But at the same time, deep down inside I ultimately knew Mark was right. He called to my attention a greater potential and a fuller life that was available to me and they are for the claiming. Mark is known as the ambassador of possibilities. And with that he always comes from a place of more and greater.

In the years I’ve come to know him, and as our friendship has grown, the one thing you’ll always find about Mark is he is perpetual optimism, his thinking about how to do more good in the world, and his desire to help everyone be the best they can be.

Beyond Mark’s optimism, his greatest attribute may be his ability to tell stories. Mark has an innate ability to tell a story that touches you deep within your soul and allows you to connect with the vision of how it can be. I truly appreciate his desire to invest in me and so many others and enlist us in the vision of doing the same so that ultimately together we can make a more powerful impact in the world.

To this day Mark continues his journey in learning more and doing more so that you, me, we can live life to its fullest and enjoy the spoils of success along the way. Thanks Mark for your encouragement over all these many years!