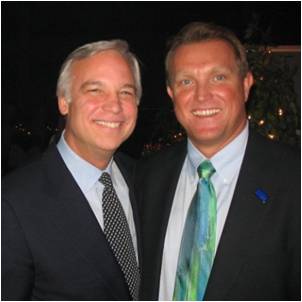 I first met Jack Canfield personally at Parker Seminars April 14, 2003. Dr. Fabrizio Mancini, the president of Parker Seminars knew that I had been a student of Jack’s work for some time. In fact I had worn out multiple sets of his Peak Performance cassette program (hope that doesn’t date me!). In the early days, I knew Jack as a success guy. Imagine my surprise when one day I saw his picture on the back of the Chicken Soup book. (that a story for another article)

Fab arranged for me to attend this seminar, sit up front, and meet Jack after his presentation. His presentation was awesome and spot on about the steps we could take to become more successful. Afterwards, he walked me up to Jack and introduced me. After a short exchange of pleasantries, Jack asked me what I did for a living. I told them that at that time I was the vice president of sales and marketing for a company in Dallas and that I had a desire to serve more people by becoming a professional speaker and trainer full time. That’s when Jack asked me a pivotal question.

Jack asked, “So what you really wanted to do?” I said, “What I really wanted to is to join you sharing the stage in January at Parker Seminars in Las Vegas. Jack smiled, reached out his hand to shake my hand, and said, “I’ll see you there, I look forward to it!” (As fate would have it, we ended up sharing the stage four months earlier at a Parker Seminars event in Toronto!)

Jack could have said anything to me at that point… he chose however to empower me by buying into my vision of what I saw going forward. For that I am ever grateful! It taught me a wonderful lesson about no matter who you are and what you’ve achieved, the simple act of kindness can truly help launch a person’s career and create a better trajectory to their success.

Since that first meeting, I’ve had the good fortune to not only called Jack a mentor, but a good friend as well. We have spent a significant amount of time together through his various training programs like Breakthrough to Success and his Train the Trainer program. I was blessed to become a facilitator and assistant for these programs. It was an honor to serve the audiences side-by-side.

I also became an inaugural member of Jack’s Inner Circle Platinum group. This is where about 25 of us had the opportunity to learn more, do more, and BE more with Jack, his knowledge and guidance.

Like I stated at the beginning, there are going to have to be a series of articles to share all the things that I’ve learned from Jack. I’ll continue to add those systematically to TWG.com. Do yourself a favor, buy, read and act upon what I call the Success Bible, Jack’s book “The Success Principles” which he authored with another great friend, Janet Switzer. It’s chock-full of 64 success principles that you can put into action immediately and start making a difference in your life…and the lives of those you touch today.